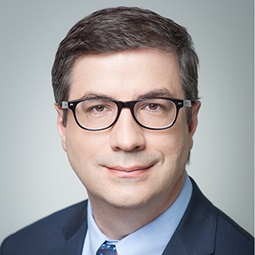 Robert Krasnodębski is an attorney-at-law admitted to practice in Poland, a certified tax advisor, a partner of Rymarz Zdort and a co-head of the tax department.

After graduating from the Faculty of Law and Administration of the University of Warsaw in 1991, Robert became a lecturer at its Financial Law Institute, where he continued to work until 2007. In 1997 he qualified as an attorney-at-law and as a certified tax advisor. Before joining Rymarz Zdort, formerly known as Weil, Gotshal & Manges – Paweł Rymarz sp.k., in 2000, he headed the tax practices at Clifford Chance and Hogan & Hartson.

Robert provides tax and legal expertise in mergers and acquisitions, private equity and capital markets transactions, and frequently represents clients before tax authorities and courts. He has a wealth of experience advising in connection with tax matters related to mergers of major public companies, as well as takeovers of listed companies. He has considerable experience advising both issuers and offering managers on tax matters connected with issuances of shares and bonds. He also has broad experience in advising financial institutions and lenders on tax matters linked to project finance, working capital funding and complex refinancing deals. His clients include public and private companies, private equity funds, underwriters and institutional clients from a variety of industries.

For many years, Robert Krasnodębski has been recognised by international legal rankings such as Chambers & Partners, The Legal 500, IFLR1000, PLC Which Lawyer? and Expert Guides, as well as the local legal rankings of a leading Polish daily, Rzeczpospolita, and the Polish edition of Forbes, as one of the leading lawyers in Poland for tax.

The prestigious legal ranking publication Chambers & Partners has since 2006 ranked Robert as one of a select few Notable Practitioners for tax in Europe. According to recent reports, Robert Krasnodębski remains one of the leading practitioners for tax mandates and is lauded as an “icon of the tax advisory market in Poland.” Interviewees report him to be a “shrewd and analytical tax adviser.” He has a wealth of expertise assisting with tax aspects of M&A and capital markets transactions.

Another prestigious legal ranking publication, The Legal 500, has since 2019 ranked Robert as a “Leading Individual” for tax.

Robert Krasnodębski was named by his peers and leading Polish companies as Poland’s best tax lawyer in surveys carried out by Rzeczpospolita in the years 2008, 2012 and 2013. He was also recommended by Rzeczpospolita in 2009, 2010, 2011, 2014 and 2015 for tax proceedings. He also won the first honourable mention at the 12th annual Pro Bono Lawyer of the Year contest organised by Rzeczpospolita and the University Legal Clinics Foundation (Fundacja Uniwersyteckich Poradni Prawnych).

Robert is the author and co-author of many insightful tax publications, out of which the following merit particular attention: a commentary on the Corporate Income Tax Act, manuals regarding financial law and Polish banking law, and a collection of commentaries on rulings of the Court of Justice of the European Union. He is a regularly featured commentator for legal newspapers and periodicals, in which he opines on both fundamental matters and major developments related to tax theory and practice.

We are pleased to announce that Rymarz Zdort advised Bank Millennium (the “Bank”) on the consolidation of its brokerage business into the capital group and represented the Bank before the Polish F...

We are pleased to announce that Rymarz Zdort supported Grupa LOTOS S.A. in its implementation of the remedies specified in the conditional decision of the European Commission of 14 July 2020 regarding...

Rymarz Zdort advised HigoSense sp. z o.o. (“HigoSense”), a Warsaw-based digital healthcare provider, and its founders in connection with a EUR 5 million Series A funding round led by Cogito Capita...

Rymarz Zdort advised Pepco Group N.V. (“Pepco”, “Group”) on Polish law matters related to the initial public offering of shares in Pepco and their admission and introduction to trading on the ...

Rymarz Zdort advised Nemera on the acquisition of Copernicus sp. z o.o. The final transaction documentation was executed on 27 October 2020. Nemera is a world leader in the design, development and ...