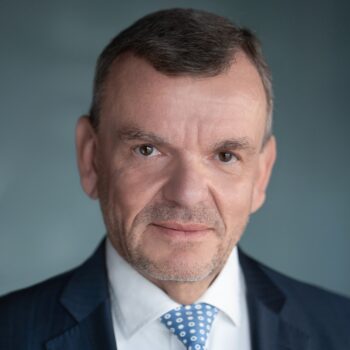 He is very business-driven, very fair in what he does on one or the other side.

He is extremely experienced and very quick to the point,

Paweł Rymarz is an attorney-at-law admitted to practice in Poland and is a managing partner of Rymarz Zdort, formerly known as Weil, Gotshal & Manges – Paweł Rymarz sp.k. He is a co-head of the mergers and acquisitions practice.

He graduated from the Faculty of Law and Administration of the University of Warsaw in 1985, qualified as an attorney-at-law in 1992 and joined the firm in 1993, becoming managing partner in 1998. Paweł has become widely recognised as an outstanding specialist in corporate law and in M&A and capital markets transactions. He has advised on the largest acquisitions and privatisations in Poland, on numerous domestic and international public offerings of securities and private equity transactions, and on the restructuring of many leading Polish capital groups.

For many years Paweł Rymarz has been recognised by international legal rankings such as Chambers & Partners, The Legal 500, IFLR1000, PLC Which Lawyer? and Expert Guides, as well as local legal rankings of a leading Polish daily, Rzeczpospolita, and the Polish edition of Forbes, as one of the leading lawyers in Poland for M&A, private equity, corporate law and corporate governance, equity and debt capital markets, restructuring  and insolvency, energy and natural resources, and telecommunications, media and technology.

The prestigious legal ranking publication Chambers & Partners has, since the inception of its Poland rankings, ranked Paweł in Band 1 for corporate/M&A; it has also repeatedly ranked him in Band 1 for capital markets and private equity and as one of Poland’s finest restructuring/insolvency specialists. According to recent reports, Paweł Rymarz is described as “a legend in the Polish market,” and maintains his stellar reputation, routinely advising on large-scale M&A private and public transactions. “He is very focused on solving problems rather than creating them,” says one commentator, before noting: “He is very business-driven, very fair in what he does on one or the other side.” Clients enjoy his “sharp, straight-to-the-point and no-nonsense” approach to matters. Pawel Rymarz is skilled at dealing with both insolvency and out-of-court restructuring proceedings. “He is extremely experienced and very quick to the point,” according to a client, who also notes that he has “a very good understanding of the situation.”

Paweł Rymarz was recognised in 2018 in The Legal 500 Hall of Fame as one of the select few elite partners who have received constant praise by their clients for continued excellence.

Paweł Rymarz has for many years been ranked the leader for M&A and restructuring in Poland in the legal ranking prepared by Rzeczpospolita. In 2018, he was awarded the honorary title of “Prawnik trzydziestolecia” (“Lawyer of the Past 30 Years”) by a jury organised under the auspices of the Polish Association of Legal Professionals and the Polish daily Rzeczpospolita as one of the top experts who has played a key role in the development of the legal profession and who has made a significant contribution to the transformation of the economic system in Poland since 1989.

Paweł Rymarz is an arbitrator at the Court of Arbitration at the Polish Chamber of Commerce.

We are pleased to announce that we advised Poland’s largest refiner, Polski Koncern Naftowy ORLEN (“PKN ORLEN”), in the completion of the next phase of the implementation of remedies in connecti...

We are pleased to announce that Rymarz Zdort has advised PGNiG S.A. (“PGNiG”) in connection with the negotiation of a merger plan with PKN ORLEN S.A. (“PKN ORLEN”). The execution of the merger...

We are pleased to announce that Anna Zorya (partner) and Viktoriia Dobrynska (senior associate) have joined the M&A/Corporate practice of Rymarz Zdort. They gained their transactional experience a...

We are pleased to announce that the petition of PAO Gazprom and OOO Gazprom Export to set aside the award of 30 March 2020 concerning the reduction of the contractual price for gas supplied by Gazprom...

Rymarz Zdort has again been named among the top law firms in Poland by Mergermarket in its Global and Regional M&A League Tables 2021 - Legal Advisors report. The firm was ranked number two in ter...

We are pleased to announce that Rymarz Zdort supported Grupa LOTOS S.A. in its implementation of the remedies specified in the conditional decision of the European Commission of 14 July 2020 regarding...

Rymarz Zdort advised the American growth equity fund TCV on a sale of shares in the public offering of Grupa Pracuj S.A. ("Grupa Pracuj"). Based on the final offer price, the market capitalisation ...