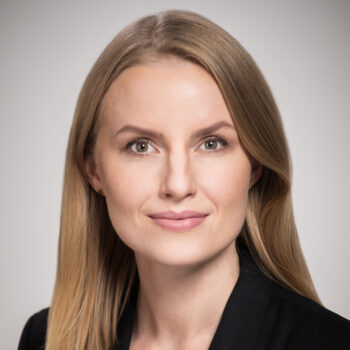 Paulina Cieślak is an attorney-at-law admitted to practice in Poland, and a senior associate in the dispute resolution and litigation department of Rymarz Zdort.

She graduated from the “Master of German and Polish Law” programme jointly organised by European University Viadrina Frankfurt (Oder) and the University of Adama Mickiewicza in Poznań in 2009. She has been admitted to a course in American law organised by the Center of American Law Studies at the University of Warsaw in co-operation with the Emory University School of Law and Georgia State University College of Law. She qualified as an attorney-at-law in 2013. Prior to joining Rymarz Zdort, formerly known as Weil, Gotshal & Manges – Pawel Rymarz sp.k., in 2022, she worked for Polish and international law firms in Warsaw. She has also served as a lawyer at a well-known and respected investment fund company and as legal counsel at the Office of General Counsel to the Republic of Poland.

A specialist in conducting court proceedings in the field of civil and economic law, her experience includes, in particular, representing clients in strategic and complex court disputes regarding, among other things, large infrastructure investments and construction contracts, contractual penalties, and compensation sought in connection with the performance of contracts between entrepreneurs. She has repeatedly and successfully represented clients in negotiations and mediations, as well as contributed to the amicable settlement of a number of disputes.

She has also advised on and issued opinions regarding many public sector contracts, analysing in particular the potential procedural risk associated with the initiation of litigation in connection therewith.

See more team members
SIGN IN
to our
Newsletter