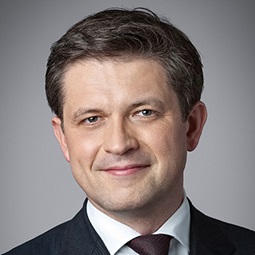 Marek Durski is an attorney-at-law admitted to practice in Poland, a partner in the corporate department of Rymarz Zdort and the head of the energy & natural resources practice.

Marek graduated from the Faculty of Law and Administration of the University of Warsaw in 2000, also completing a course in English and European law organised by the British Centre for English and European Legal Studies at the University of Warsaw in cooperation with the University of Cambridge, and qualified as an attorney-at-law in 2005. Before joining Rymarz Zdort, formerly known as Weil, Gotshal & Manges – Paweł Rymarz sp.k., in 2014, from 1998 until 2011 Marek worked in an international law firm where he was the energy team leader. Between 2011 and 2013 Marek was a board member and general counsel of a leading privately owned vertically integrated energy company in Poland.

Marek specialises in the energy sector. He has advised a broad spectrum of clients involved in the energy business in Poland (e.g. generators, system operators, traders, developers, off-takers, financial institutions and equity investors).

A specialist in energy-related regulatory advice (such as licensing issues, tariffs, regulatory disputes, structuring advice, regulatory compliance, interconnection issues, EU law, and lobbying activities), Marek also has broad experience in the development of power plants, both conventional (coal and gas-fired) and renewable (offshore and onshore wind farms, photovoltaic projects, and biogas and biomass installations), and related project finance transactions, as well as in the development of power and natural gas interconnector projects. In addition, he has wide experience in providing energy and natural gas trading advice (including in respect of commodity derivatives) and the negotiation of long-term commercial agreements (including crude oil purchase contracts). His practice also covers M&A and privatisation transactions within the energy sector as well as corporate restructuring projects driven by the changing regulatory environment.

The prestigious legal ranking publication Chambers & Partners has ranked Marek for many years as one of the best specialists for energy & natural resources in Poland and since 2018 it has ranked him as one of a select few Notable Practitioners for energy and projects in CEE. According to recent reports, Marek Durski is a well-regarded energy and infrastructure lawyer and a regular adviser on major transactions in the mining and energy sectors. He is praised by one client as a “practical, personable lawyer with a great depth of knowledge,” while another commends him as a “tough negotiator and a force to be reckoned with.”

Another legal ranking, The Legal 500, has repeatedly recommended Marek for energy and natural resources and in its 2020 edition it ranked him in the “Next Generation Partners” category in this field. In the most recent report clients state that, “Marek Durski stands out with his expertise in a number of sectors of law and an ability to oversee complex legal projects. His experience in both legal and managerial positions is second to none. In fact, he may very well be one of the best business lawyers in the country.”

Rymarz Zdort is advising a consortium of lenders on the complex financing of a portfolio of 140 photovoltaic farms. The portfolio has an aggregate capacity of 134 MW and is being developed by 32 borro...

We are pleased to announce that the petition of PAO Gazprom and OOO Gazprom Export to set aside the award of 30 March 2020 concerning the reduction of the contractual price for gas supplied by Gazprom...

Rymarz Zdort provided legal support to PGNiG S.A. ("PGNiG") in connection with the purchase of a controlling stake in Ukrainian company Karpatgazvydobuvannya from Energy Resources of Ukraine Managemen...

Rymarz Zdort is pleased to announce that in the most recent edition of the IFLR1000 2021 ranking, it has again been recognised as one of the best law firms in Poland for M&A. Rymarz Zdort has been...

Rymarz Zdort advised PGE Energia Ciepła S.A. (“PGE EC”), an entity of the capital group of PGE Polska Grupa Energetyczna S.A. ("PGE Group"), in the final stage of the consolidation of its assets....

Rymarz Zdort advised entities of Energa Capital Group S.A., part of the ORLEN Group, on various aspects of a carve-out of a gas power plant from Elektrownia Ostrołęka sp. z o.o. and in connection wi...

Rymarz Zdort advised Wirtualna Polska Media S.A. ("WP") on the purchase of a 3 MW photovoltaic farm in the Lower Silesia region. This is the second such investment by WP, after their first PV farm was...