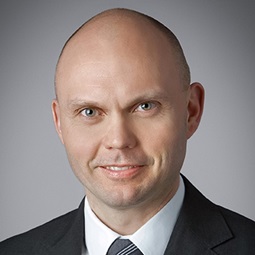 Dr hab. Łukasz Gasiński is an attorney-at-law admitted to practice in Poland, a US-qualified attorney, a partner in the corporate department of Rymarz Zdort and the head of the regulatory team.

Łukasz lectures on commercial law to both undergraduate and post-graduate students at the University of Warsaw. He has authored more than 40 publications, including a textbook and two monographs, including one titled “Limits on the freedom of wording the statute of a joint-stock company”.

A specialist in corporate law and securities law, he has participated in significant privatisation projects, corporate restructurings and public M&A transactions. He has also advised a wide range of leading financial institutions on regulatory matters and proceedings before the Polish Financial Supervision Authority.

The prestigious legal ranking publication Chambers & Partners has since 2010 ranked Łukasz as one of the best specialists in Poland for equity capital markets, and since 2015 for corporate/M&A. According to recent reports, Łukasz Gasiński is recognised for his M&A work in the banking sector. He also advises on corporate reorganisation matters. Market commentators say he is a “real pleasure to work with.” He is noted for his experience in securities law.

Another prestigious legal ranking, The Legal 500, several times recommended Łukasz for insurance and since 2018 it has recommended him for mergers and acquisitions. Also since 2018, an additional legal ranking, IFLR1000, has recommended Łukasz for M&A and equity capital markets, and since 2020 it has singled him out as one of a select few “Highly Regarded” lawyers in these fields as well as in private equity transactions. In a legal ranking published by Polityka Insight, a centre for policy analysis, Rymarz Zdort has been ranked among the top regulatory law firms for banking since 2016.

Łukasz is also the Chairman of the Council of the Batory Community Foundation, an organisation supporting the development of Batory High School and its students, and a member of the Friends of the Forum, an informal group of individuals who advocate for Polish-Jewish dialogue.

We are pleased to announce that Dr Adam Puchalski, counsel, and Dr Łukasz Karasek, senior associate, are joining the regulatory practice of Rymarz Zdort on 19 April 2022. Our new lawyers have gained ...

Rymarz Zdort advised Blue Media in connection with the execution of an investment agreement concerning the acquisition of a minority stake in Blue Media Group by Pollen Street Capital. Upon the com...

Rymarz Zdort is pleased to announce that in the most recent edition of the IFLR1000 2021 ranking, it has again been recognised as one of the best law firms in Poland for M&A. Rymarz Zdort has been...

Rymarz Zdort is pleased to announce that in the most recent edition of the IFLR1000 2021 ranking it has again been recognised as one of the best law firms in Poland for capital markets. In the categor...